The 2014 Maine Lobster Festival is under way and folks from all over the world are descending on Rockland to celebrate America’s favorite crustacean.  This year, the organizers of the festival decided to recognize the families behind the industry with their “Lobster Livin’ ” theme.  It made me reflect on the familial aspects of lobster fishing and inspired my August article for Landings Newsletter which I have published below.  Enjoy! 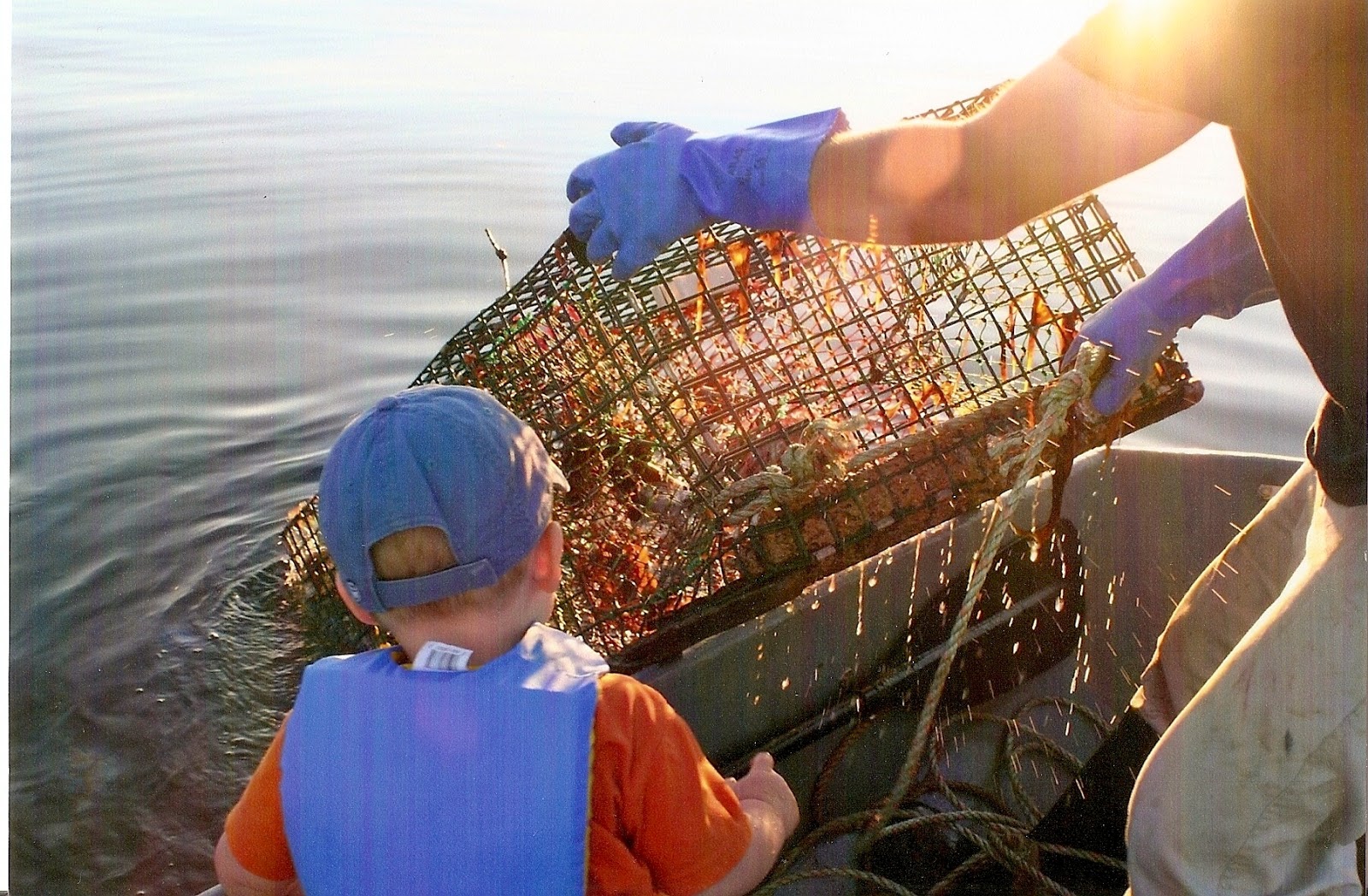 I was so pleased to see that the organizers of this year’s Maine Lobster Festival chose to honor Maine’s hard-working lobstering families with their festival theme, Lobster living—Celebrating the families behind the industry. Lobster fishing is, and always has been, a family affair. For every lobster fisherman out on the water, there is usually a wife back home who packed his lunch, painted his buoys and after whom his lobster boat is named. There is also often a son or daughter who spends his or her summers working with him as a sternman.

This was the case in my family. My father was always the captain—of the business and the vessels—but my mother, my brother and myself each played crucial roles in making his enterprise a success. My mother painted my father’s buoys until my brother and I were old enough to take over the task. She did the bookwork and much dreaded ‘bait runs’ –fetching truckloads of sardines from Booth’s Canning Company in Lubec. She also woke up with my father at the crack of dawn each morning to pack his lunch before he headed out on the ocean.

As soon as we were old enough, my brother and I started working as stern’men’ on our father’s boat in the summer months and on school breaks.  During the spring we would assist with the cementing and setting of the traps.  Each fall we would meet my father at the wharf after school to help him band the abundance of lobsters. At times my grandmother would even join in, lending a hand so we could move through the catch more quickly. While the image of the independent fisherman wrestling his living from an unforgiving ocean fills paintings, postcards and tourist’s minds, it is important to remember the family members who stand behind him. It is not lobstermen, but lobster fishing families that have built the backbone of Maine’s coastal economy.

I have always been fascinated by the familial aspects of lobster fishing. I not only dedicated the book I published in 2012 to the lobster fishing families of Downeast Maine, but as I was writing the book I also researched the roles wives and children play in the lobster harvesting process. Of the Downeast Maine fishermen I surveyed, almost 80% have their children help out on the boat.

I find this an amazing figure. We live in an age where many children do not know what their parents actually do for a living and more than 50% of the nation’s young workforce has never held a basic, paying job, according to a Bureau of Labor Statistics survey in 2010.  The offspring of lobster fishermen, on the other hand, grow up engaged in the industry and idolizing their seafaring fathers. Your average pre-schooler passes the day playing princesses or Fireman Sam. The children of lobstermen ‘play’ lobster fishing in old skiffs parked in their parents’ front yards. By the time they graduate grammar school, many of them are fishing a small gang of traps from an outboard boat under the guidance of their father.

My brother, Nick, and I playing lobster fishing in our parents front yard.

Even if they don’t go on to become full-time fishermen, these children enter adulthood equipped you with crucial skills needed to thrive in the modern working world. While my brother has become a full-time lobster fisherman, I work at an advertising agency in London. It is a long way from the shores of Cutler and the stern of a lobster boat, yet the work ethic and understanding of teamwork I gained through lobstering have served me well.

The ad world is a notoriously high pressure environment and the hours are relentless. But spending 12 hour days stuffing bait bags and banding unruly lobsters from a young age gave me stamina. There have been many late nights at the office when I’ve summoned the perseverance I learned on the lobster boat to help me push through the final stretch of a presentation or new business pitch. I recall sitting at my desk thinking, ‘this is nothing compared to a rough fall day out on the ocean’.

My father and me tending a lobster trap in the summer of 1996. Photo Courtesy of Eric Piper.

Being part of a lobster fishing family also teaches children the importance of teamwork. I was the littlest member of the Lemieux family and a girl but I was always able to find a valuable role to play in our lobster business. Too young to run a winch and too weak to lift a crate full of lobster, I focused on becoming a fast bander, a precise buoy-painter and adept at hooking on traps and totes. Through the process, I grew to understand the importance of the more humble, supporting roles in a business that are vital to making it a success.

Read the headlines and you will become aware that young people are facing a far more challenging transition from school to working life than ever before. Today’s graduates, often called Millennials, have been characterized as “unprepared for the 21st century workforce.” Employers criticize them for lacking a solid work ethic, commitment, humility and the ability to collaborate in a team environment.  Perhaps more children should come spend some time working on a lobster boat!