The enjoyment of the Winter Harbor Lobster Festival starts with the journey there. Once you peel off Route 1 and make your way towards the tip of Schoodic Peninsula, you pass by beautiful blueberry barrens, mossy heaths and sheltered coves.  Route 195, one of the two roads leading to Winter Harbor, winds its way through pretty Prospect Harbor and past the old, iconic “Big Jim the Fisherman” sign. Stretching up over the village rooftops and into the sky, “Big Jim the Fisherman” was originally erected as an advertisement for the Stinson Seafood plant.  Sadly Stinson’s closed in 2010.  It was the last working sardine cannery in the United States.  The plant has since been reopened as a lobster processing facility and the yellow-slickered fisherman, which used to hold a giant can of Beach Cliff sardines, now clutches a lobster trap. 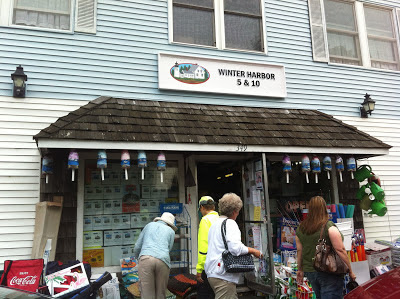 Once you arrive in Winter Harbor, you will be greeted with a classic, small town celebration which includes a pancake breakfast, lobster dinner, parade and lobster boat races.  All of these activities are facilitated by local residents and  take place in the relaxed surroundings of the town. Winter Harbor has a small but pretty Main Street which hosts a 5 and 10 and a few architectural gems, including the Winter Harbor Public Library (Channing Chapel). The fishing village also has the prerequisite weathered fishermen’s sheds with salt-crusted lobster buoys and a snug little harbor full of multi-colored lobster boats. 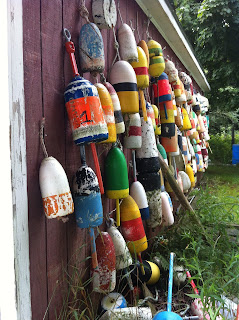 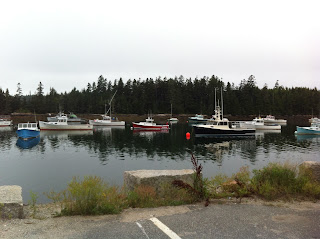 In my youth, I attended the festival many years by boat to partake in the lobster boat races with my father. Several years ago, I enjoyed the festival as a flatlander and, over the course of the day, witnessed 900 pounds of lobster being served to satisfied diners.  The lobster dinner, which runs from 11:00am until 3:00pm,  is a central part of the festival. The year I attended, festival volunteers were piling plates high with steamed lobster, drawn butter, corn on the cob and fresh blueberries and cream for the bargain price of $15. A Lobster Dinner at the Winter Harbor Lobster Festival In 2012, you could also fetch a lobster roll at the Winter Harbor Festival for the bargain price of $6.  This year, I suspect the prices will be a bit higher. 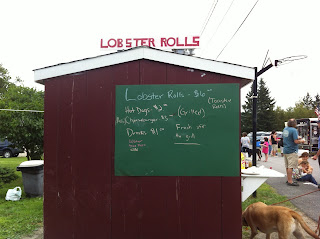 If you make it to the Winter Harbor Lobster Festival, I’d love to hear what you think.  And eat some lobster for me!