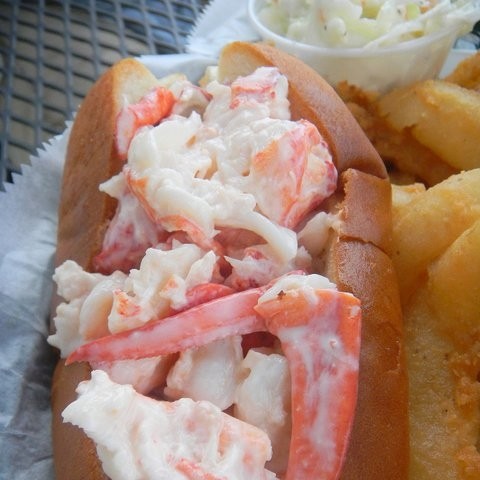 May means it’s time to enjoy mouth-watering lobster rolls in the rough.

Summer is coming and that leaves many of us salivating for fresh lobster rolls. Thankfully, many of Maine’s top lobster shacks are dusting off the cobwebs and opening their doors this May, just in time for Memorial Day. Here’s a list of some of Maine’s best lobster shacks which are open this May.

MAINE LOBSTER SHACKS OPEN THIS MAY

The Clam Shack, Kennebunkport, Maine. The Clam Shack started dishing up their award-winning lobster rolls starting on May 6th. They will be open weekends through Memorial Day, when they kick things into full gear for summer. While the Clam Shack doesn’t offer ocean views, they more than make up for it with the quality of their lobster.

The Lobster Shack at Two Lights, Cape Elizabeth, Maine. This is a classic lobster shack has been open since early spring, offering alfresco dining and ambiance overload. Perched at the edge of a rocky shore, it provides views of two iconic lighthouses as well as all the classics you would expect at an authentic lobster shack.

Harraseeket Lunch and Lobster, South Freeport, Maine. This lobster-themed eatery, with ocean views, alfresco dining and freshly delivered lobster, opened at the end of April. They offer a variety of lobster dishes, including lobster rolls and lobster dinners, along with homemade desserts, including whoopie pies.

Red’s Eats, Wiscasset, Maine. Reds, which is a more of a roadside hut than a shack, opened back in April. As with The Clam Shack, it doesn’t offer ocean views but it does deliver one of the most famous lobster rolls on the coast of Maine.

Five Islands Lobster Co., Georgetown, Maine. Possibly the most picturesque place to enjoy a lobster dinner in the rough opened on May the 7th. As with The Clam Shack, Five Islands lobster shack will be open weekends only until Memorial Day. Roll up your sleeves and enjoy the 360-degree views of the ocean and five islands of Sheepscot Bay as you tuck into boiled lobster dinners or lobster rolls on picnic tables lining the pier.

Estes Lobster House, Harpswell Neck, Maine. Estes have been serving up a wide variety of lobster dishes with a side of ambiance since May 4th. Estes offer both the basics and more adventurous options like lobster pie, lobster dip and lobster mac and cheese.

Thurston’s Lobster Pound, Bernard, Maine. Thurston’s open on Memorial Day, offering a good variety of lobster entrees, from lobster rolls and shore dinners to lobster dip, lobster stew and lobster BLTs. Thurston’s is perched on a pier overlooking the ocean and the lobster boats that bring in the catch.

Bagaduce Lunch, Brooksville, Maine. Bagaduce opened their no-frills take out at the end of April. Their forte is lobster rolls and a variety of fried seafood baskets, including an amazing haddock burger. All their seafood is locally sourced and delicious.

What are your favorite lobster shacks?  I would love to hear your tips and see your photos of mouth-watering lobster rolls in the rough!